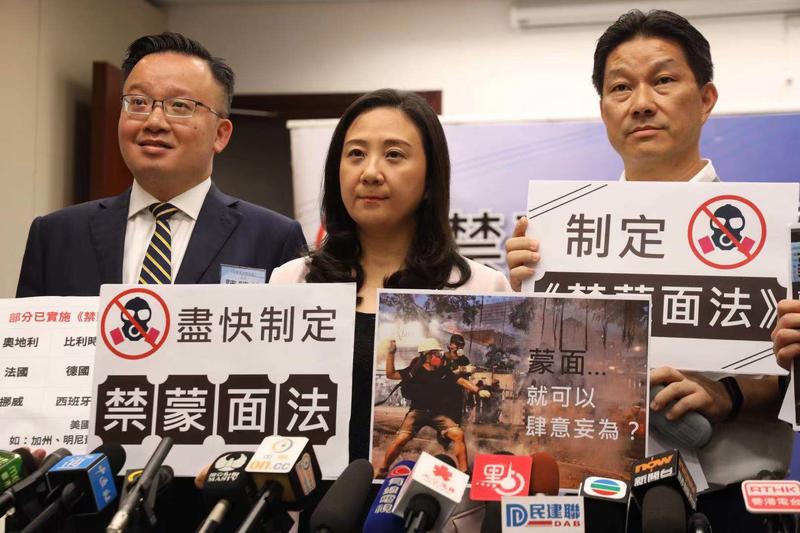 Elizabeth Quat Pui-fan from the Democratic Alliance for the Betterment and Progress of Hong Kong joins a cross-sector concern group on Thursday, calling for anti-mask law to deter the rampant masked rioters and help the authorities to contain escalating violence.PHOTO / CHINA DAILY

A cross-sector concern group established on Thursday is calling for anti-mask legislation in Hong Kong – two days after escalating violence turned many parts of the city into a “warzone” on the National Day of Oct 1.

An anti-mask law that bans protesters from wearing masks in public demonstrations to conceal their identities would help the government and police contain the escalating violence, according to the 20-strong group consisting of lawmakers, lawyers, business leaders and retired police officers at a press conference on Thursday afternoon.

The legislation aims to deter masked radicals involved in the often-violent illegal protest marches. It will not affect people voicing their political views at legal and peaceful rallies

As Hong Kong’s anti-government demonstrations entered the 18th week, black-clad masked radicals, in total disregard of the city’s laws, started fires on the streets and exits of multiple MTR stations and hurled gasoline bombs at the police officers.

Lawmaker Elizabeth Quat Pui-fan from the city’s largest political party in Legislative Council – the Democratic Alliance for the Betterment and Progress of Hong Kong – said the prolonged anti-government protests, often hijacked by rioters, has shunned investors and tourists and also deprived residents of their rights to travel and freedom of speech.

The legislation aims to deter masked radicals involved in the often-violent illegal protest marches, Quat said, adding that it will not affect people voicing their political views at legal and peaceful rallies.

Also on Thursday afternoon, a civic group of about 20 residents, in a rally outside the government’s headquarters, renewed their calls for immediate legislation to restore peace and order to the territory.

An anti-mask law in the United States can be traced to 1845. New York State made it illegal for three or more people to wear masks in public after tenant farmers dressed up as native Americans killed their landlords and attacked law enforcement officials.

In 2013, Canada approved a bill to forbid people covering their faces during unlawful assemblies. This offense carries a maximum prison term of 10 years.

Wearing masks provides a sense of anonymity and makes people more likely to violate rules and norms, according to empirical data gathered by social scientists over the past few decades.

In 1979, Purdue University psychologists examined how wearing masks affected the likelihood of children breaking rules by monitoring the candy-taking behavior of children on Halloween. They found that about two-thirds of children in the masked costumes broke the two pieces of candy limit, compared with only one-third of those not wearing masks.

© 2019, . Disclaimer: The part of contents and images are collected and revised from Internet. Contact us ( info@uscommercenews.com) immidiatly if anything is copyright infringed. We will remove accordingly. Thanks!